Who would have ever imagined that from an Indie actor, Coco Martin is now one of the biggest stars in the country? Suffice to say that the actor’s hard work and perseverance finally paid off. He is now the biggest name on TV, especially with his long-running FPJ’s Ang Probinsyano. Take a peek into his tropical haven in Quezon City and to say that you’ll be mesmerized will be an understatement. His dream house is more than stunning.

The actor said that it took him about three years to finish his extremely huge house situated in a 2,000 sq. m. lot in Quezon City. Coco further said that initially, he wasn’t satisfied with the house’s shape that he decided to buy the adjoining lots which resulted to 2K sq. m. property. The actor took more than a couple of years in completing the house because he doesn’t want to fall into a big debt. Coco said that in showbizness, you can’t be sure because you may have work now but none tomorrow. So what he did was save up and slowly, his dream house was completed. 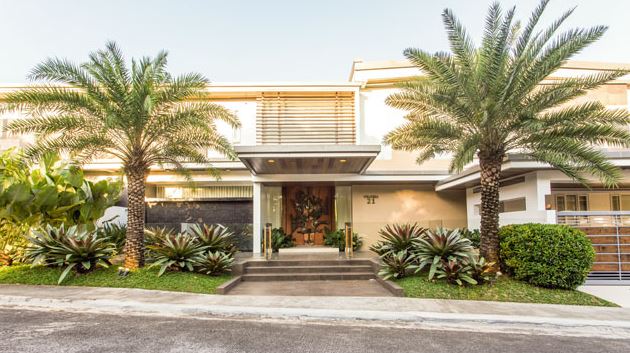 Looking from the outside, it’s very obvious how huge the property is. Two healthy trees were placed to frame the main door and several imperialis and other flourishing plants surround them. These plants add to the tropical vibe of the house. The main door gives a grand entrance to the house. It is an intricate work of art that will leave guests in awe. Abdulmari Asia Imao, National Artist for Visual Arts, was the one responsible for the artwork of the main door. It highlights a fish which was personally requested by the actor himself because his grandmother falls under the Pisces zodiac sign.

Another magnificent feature of the house is the two posts with artworks that make it appear similar to trees. It was done by Miguel Aguas, a metal & glass designer. Coco invested in artworks for a more grandiose entrance. Another part of the house that will make your jaw drop is the living area. Aside from being very spacious, it is homey and comfy yet very elegant. It has that vibe of being in a first-class resort. An amazing amber sculpture by artist Trek Vladizno will never go unnoticed once you’re in the area. The actor describes it as somewhat similar to sap or resin and during summer, it tends to become soft. It has to be retouched often by flaming it. 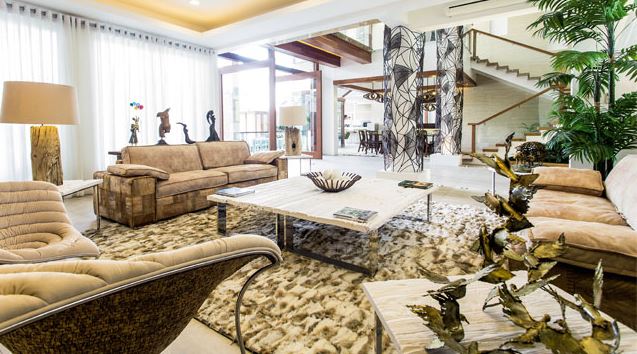 There are to big and comfy sofas and in between them are two Paisley chairs by Vito Selma. There are a stunning center table and a rug completing the tropical feel of the house. Natural light streams through the glass windows and doors. There are more artworks behind one sofa and one is a piece from Balloons in life series by Ronald Castrillo. The dining area boasts of a 12-seater Wave dining table by Kenneth Cobonpue and Avata dining chairs by Vito Selma. The wooden dining pieces add warmth to the area. The Litten hanging lights from Triboa Bay Living were arranged by the actor personally. 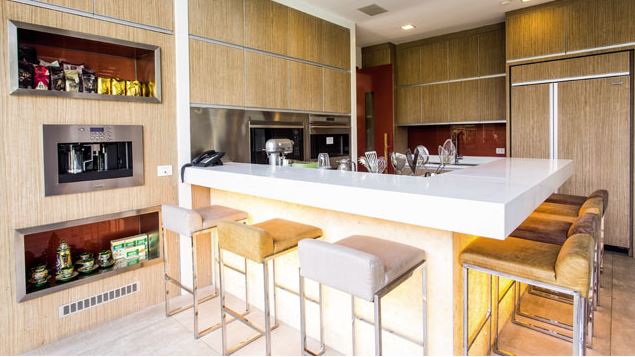 An open kitchen near the pool area can also serve as a spot for al fresco dining. It is completely equipped with different kinds of appliances and ovens. There are several cabinets where the essentials of the family can be stored. Yes! You read it right. The actor’s house also comes with a bar area. Vito Selma was responsible for the customized table and the ceiling’s design. The wall is filled with different bottles of wines. There’s a hangout spot just beside the area. It is a dark finished area that gives it a laid-back vibe. This is absolutely a perfect spot where Coco and guests can have a drink or two. 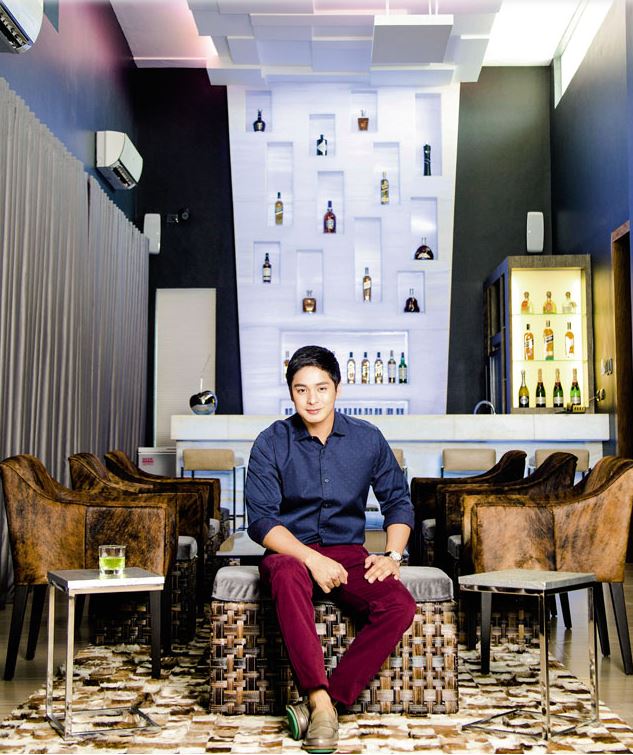 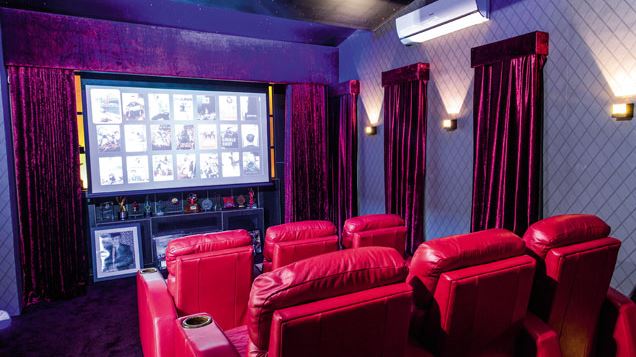 The home theater can accommodate up to 8 persons who would like to enjoy a movie while relaxing on the red-colored reclining chairs. Coco’s awards are placed behind the screen. The mechanical screen can be rolled up when no one wants to use it.

There’s an eye-catching slab of onyx behind the actor’s tufted bed. Coco said that people say that it’s a lucky charm. The piece gives the actor’s room a psychedelic appeal which also gives balance to the other pieces of furniture inside. The side tables are from Kenneth Cobonpue and another painting in the room is from Arturo Luz, National Artist for Visual Arts. 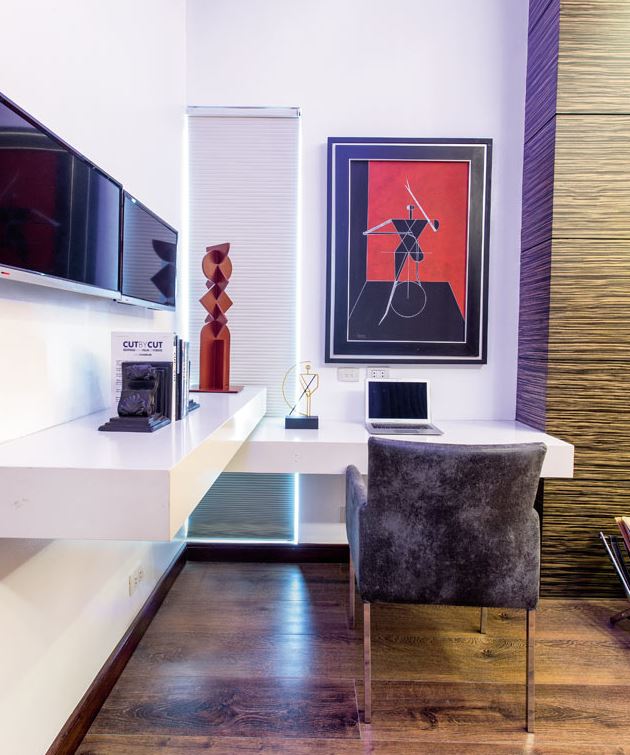 One corner of the bedroom serves as an area for the actor to work, review and memorize scripts, and read. 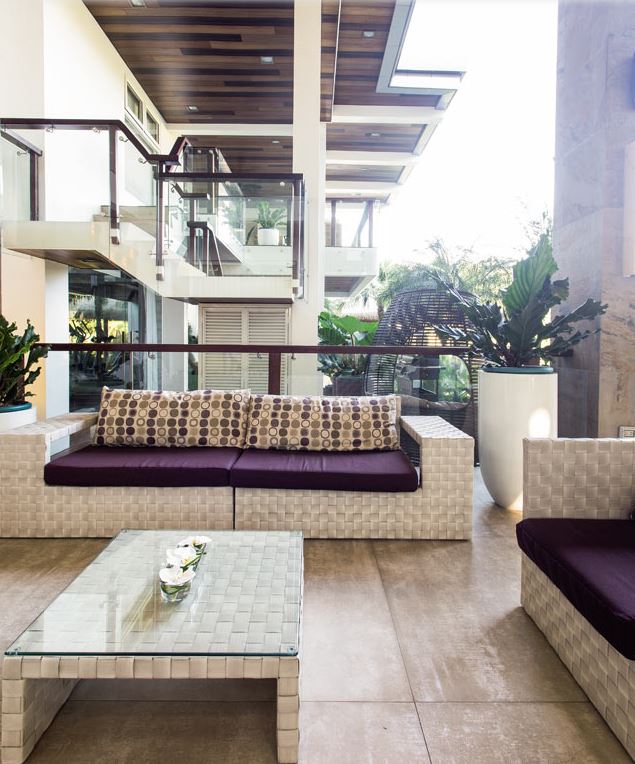 This area of the house would make guests feel like they can stay there forever. It has 2 easy chairs and a loveseat from the Link collection of Kenneth Cobonpue. 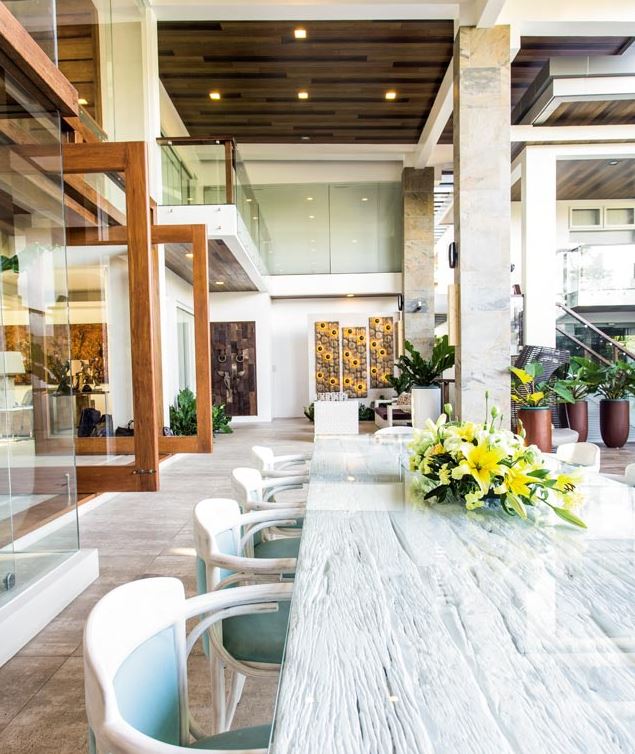 There’s a ten-seater table in the area where Coco and his family usually eat. 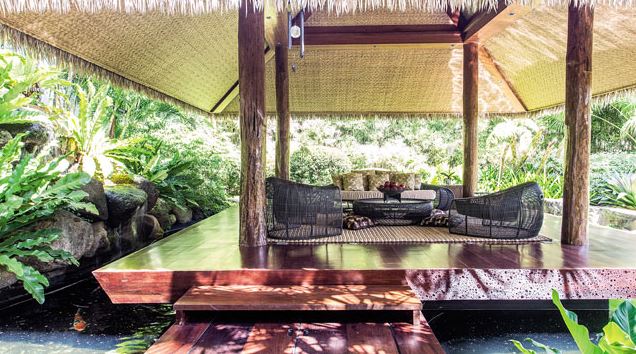 Though it appears like abaca, the materials used in the Gazebo are synthetic materials to avoid rotting and having the need to replace it. The Croissant set will give guests a feeling that they’re on the beach. 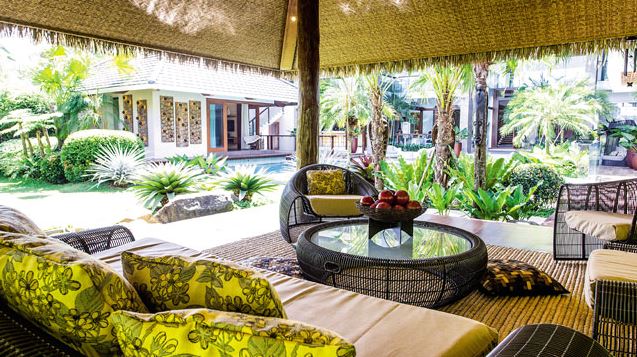 It’s built on top of their koi fishpond. 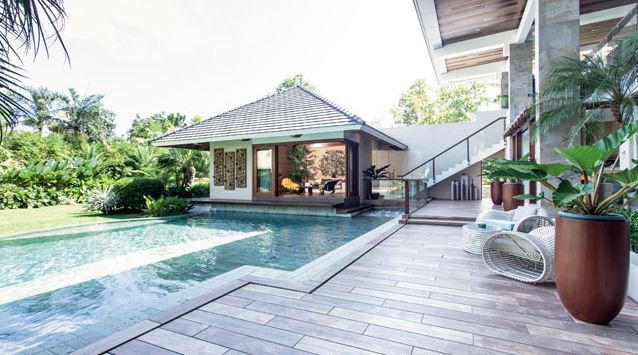 The cabana serves as a guest house when the situation calls for it. It has a bed and a cabinet. It is also furnished with a brawny coffee table and a relaxing sofa. It also has a mini kitchen with complete stock and a bathroom. 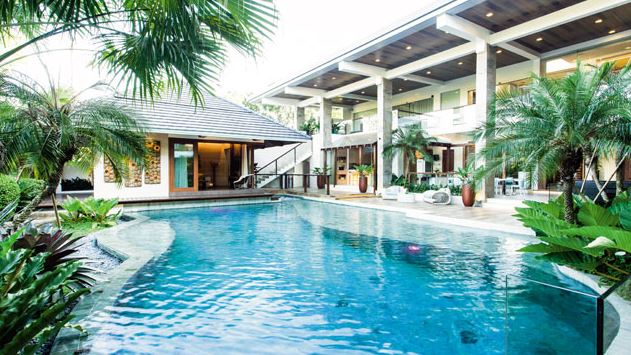 The pool area looks very calm and peaceful during daylight but turns into an enchanting place come night time. The pool’s depth ranges from 4-7 feet so his nephews and nieces can enjoy. He even had a jacuzzi made just for the kids.  (source)